Can you quote from the paper, telling us why so many experts condemned cod liver oil?

I don't know if copyright laws allow the author to do that, but I will take the chance. The crux of the problem is that a form of vitamin A, retinoic acid, weakly activates the vitamin D response element on the gene and perhaps blocks vitamin D's more robust activation. In fact, the authors of a 1993 study state "there is a profound inhibition of vitamin D-activated...gene expression by retinoic acid."

The key is having the proper ratio of vitamin D to vitamin A in your body. To obtain this proper D/A ratio, you must make a choice. (1) Either obtain the D/A ratio Nature intended—that is, the ratio the human genome evolved on—or (2) assume one knows better and intervene in a closed system, bypass the controls in the intestine, and inject active A directly into your blood by taking vitamin A or cod liver oil. Vitamin A production is tightly controlled in the body, the source (substrate) being carotenoids from vegetables in your intestine. The body uses these carotenoid substrates to make exactly the right amount of retinol for your body. That is, it is a closed, tightly regulated, system, one designed to perfection by Nature. When you take vitamin A as retinol, such as in cod liver oil, you intervene in this closed system and bypass the controls. Proceed at your peril. 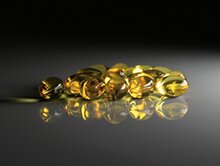 When you take vitamin A as retinol, such as in the cod liver oil gelcaps pictured here, you intervene in this closed system and bypass the controls. Proceed at your peril.

Vitamin D is also a closed, controlled system and I don't recommend intervening in that system either. Vitamin D cholecalciferol is a substrate like carotenoids, it is not the active substance. Taking vitamin A as retinol is like taking activated vitamin D (calcitriol). Doing so bypasses controls and I have never recommended anyone take activated vitamin D except patients with renal failure under the care of a nephrologist. As long as your vitamin D (cholecalciferol) dose is not excessive, you are not intervening in a closed system, you are simply providing the vitamin D substrate. The body, if and when it has enough vitamin D substrate, will use what it needs and dispose of, or store, the rest.

Thus the goal is to provide all the vitamin A and vitamin D substrate the body would have obtained in a natural state, so the body can regulate both systems naturally. This is best done by eating colorful vegetables and by exposing your naked skin to equatorial sun every day. Since most of us can't do the later, and won't do the former, we have to take the same amount of vitamin D substrate we would have obtained living 100,000 years ago—and may want to take beta-carotene substrate in a multivitamin. As far as I know, low doses of beta-carotene (1,000–2,000 IU per day) will not do too much harm. The best way to get vitamin D substrate, as far as I can tell, is to take at least 5,000 IU of vitamin D3 per day in the winter and stop all vitamin D in the summer and sunbathe. Alternatively, use a tanning bed when the sun is too low on the horizon to sunbathe. Remember when you are outside, if your shadow is longer than you are tall, you are not making much vitamin D.

Excerpts from our paper

The italicized passages below are from our paper and are the heart of the reasoning used to issue the warning about vitamin A and cod liver oil. They are the advice of the 16 experts who co-authored the paper with me, not just mine alone:

"Although activated vitamin D and vitamin A signal through common cofactors, they compete for each others function. Retinoic acid antagonizes the action of vitamin D and its active metabolite. In humans, even the vitamin A in a single serving of liver impairs vitamin D's rapid intestinal calcium response. In a dietary intake study, Oh, et al, found that a high retinol intake completely thwarted vitamin D's otherwise protective effect on distal colorectal adenoma, and they found a clear relationship between vitamin D and vitamin A intakes, as the women in the highest quintile of vitamin D intake also ingested around 10,000 IU/d of retinol."

A recent Cochrane Review found that vitamin A supplements increased total mortality rate by 16%, perhaps through antagonism of vitamin D.

"Furthermore, the consumption of preformed retinol even in amounts consumed by many Americans in both multivitamins and cod liver oil may cause bone toxicity in individuals with inadequate vitamin D status. Women in the highest quintile of total vitamin A intake have a 1.5-times elevated risk of hip fracture."

"Another recent Cochrane meta-analysis concluded that although vitamin A significantly reduced the incidence of acute lower respiratory tract infections in children with low intake of retinol, as occurs in the Third World, it appears to increase the risk and/or worsen the clinical course in children in developed countries."

"As early as 1933, Alfred Hess, who discovered that sunlight both prevented and cured rickets warned about vitamin A consumption, concluding, '...as to a requirement of thousands of units of vitamin A daily, the unquestionable answer is that this constitutes therapeutic absurdity, which, happily, will prove to be only a passing fad' (p 662)."

If vitamin A increases the risk of respiratory infections, its high content in modern cod liver oils will only mask the full benefit of adequate vitamin D nutrition

"Clinical lore holds that Vitamin A is an anti-infective. We suggest that lore exists because of old cod liver oil studies. Semba reviewed early literature on vitamin A, usually given as cod or halibut liver oil, as a successful anti-infective. For reasons that are not entirely clear, fish liver oils of the time contained much higher amounts of vitamin D then does modern cod liver oil, perhaps because modern processing removes the vitamin D during distillation and then replace it at lower doses. Furthermore, a meta-analysis concluded that vitamin A, when given alone, increases the incidence of respiratory tract infections. If vitamin A increases the risk of respiratory infections, its high content in modern cod liver oils will only mask the full benefit of adequate vitamin D nutrition."

"As the prevalence of vitamin A deficiency in the United States is apparently much lower than the prevalence of subclinical vitamin A toxicity, we cannot recommend cod liver oil for either adults or children. (We exclude fish body oil from our warning, as it contains no vitamin A or vitamin D but is a very important source of omega-3 fatty acids.) For example, in a recent assessment of serum retinyl esters in a group of obese individuals, four percent had levels >10% of total retinol which usually indicates hypervitaminosis A. Instead, a diet rich in carrots, sweet potatoes, cantaloupe, and other orange fruits and vegetables will supply all the carotenoids the body needs to make retinol without the potential for hypervitaminosis A, especially when additional preformed retinol already exists in dairy products, eggs, and fortified cereal. We wish our diet were as rich in vitamin D. With the exception of infants on formula or toddlers drinking large amounts of milk or fortified juice, adequate amounts of vitamin D are virtually impossible to obtain from diet."