Together we can end the illness and disease caused by the worldwide epidemic of vitamin D deficiency.

These companies donate to the Vitamin D Council.

Vitamin D and Your Health Autism

The Autism Society of America describes autism as "a complex developmental disability that typically appears during the first 3 years of life and is the result of a neurological disorder that affects the normal functioning of the brain, impacting development in the areas of social interaction and communication skills...One should keep in mind however, that autism is a spectrum disorder, and it affects each individual differently and to varying degrees." They estimate that 1.5 million Americans and their families are now affected—a national health crisis, costing about $35 billion annually.

After exhaustive metabolic and genetic evaluations, more than 60% of individuals with autism spectrum disorders are found to have idiopathic disease. Schaefer GB, Lutz RE. Diagnostic yield in the clinical genetic evaluation of autism spectrum disorders. Genet Med. 2006 Sep;8(9):549–56. Even after the most thorough medical evaluation possible, doctors simply cannot find the cause for their autism.

What are autism's five unexplained features?

Any valid theory of autism must explain the following:

Whatever its genetic roots—and they are strong—autism hardly follows classic genetic inheritance. What is clear is that the genes that control autism confer predisposition, not predestination.

Multiple scientific groups have reported greatly increasing rates of autism over the last 20 years. Dr. Hjordis Atladottir, of the University of Aarhus in Denmark, recently reported that hyperactivity and Tourette's syndrome (two other childhood neurodevelopmental disorders) have increased dramatically right along with autism, while a third, childhood obsessive-compulsive disorder, has not changed at all. Why would some childhood neurodevelopmental disorders increase dramatically in such a short time, while another is entirely unchanged? Perhaps something is harming our children's brains, and doing so with increasing frequency. Kippes C, Garrison CB. Are we in the midst of an autism epidemic? A review of prevalence data. Mo Med. 2006 Jan–Feb;103(1):65–8. Newschaffer CJ, Falb MD, Gurney JG. National autism prevalence trends from United States special education data. Pediatrics. 2005 Mar;115(3):e277–82. Atladottir HO, et al. Time trends in reported diagnoses of childhood neuropsychiatric disorders: a Danish cohort study. Arch Pediatr Adolesc Med. 2007 Feb;161(2):193–8.

Professor Gillian Baird, and his colleagues at Guy's and St. Thomas' Foundation Trust in England, recently discovered that about 1 in 88 English children will eventually develop autism. Families caring for autistic children are under more stress than those caring for a child with cystic fibrosis, a fatal illness. The lifetime cost of autism is $3.2 million per case. Not only is autism epidemic, it is catastrophic. Baird G, et al. Prevalence of disorders of the autism spectrum in a population cohort of children in South Thames: the Special Needs and Autism Project (SNAP). Lancet. 2006 Jul 15;368(9531):210–5. Bouma R, Schweitzer R. The impact of chronic childhood illness on family stress: a comparison between autism and cystic fibrosis. J Clin Psychol. 1990 Nov;46(6):722–30. Ganz ML. The lifetime distribution of the incremental societal costs of autism. Arch Pediatr Adolesc Med. 2007 Apr;161(4):343–9. 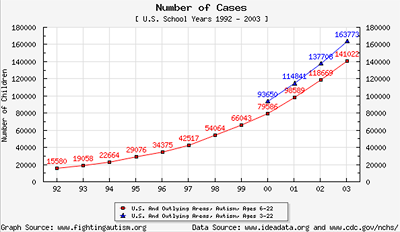 *These statements have not been evaluated by the Food and Drug Administration. These products are not intended to diagnose, treat, cure, or prevent any disease.