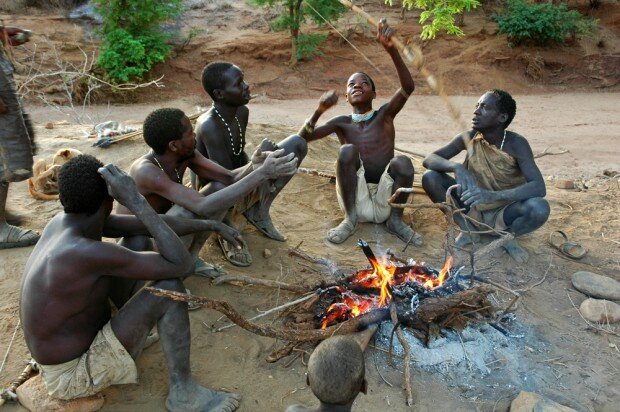 The most recent paper by Dr Martine Luxwolda and colleagues of the University Medical Center Groningen in Holland is so remarkable that we will be covering the paper in a three part series. These six scientists have discovered and investigated a few things that rock our understanding of vitamin D.

If you remember, this same group discovered that free-living hunter-gatherers around the equator have vitamin D blood levels of about twice the modern American, almost 50 ng/ml. How they ever got primitive hunter-gatherers to give their blood, I do not know but I’d like to have been around for the conversation: “You want to take my blood from me to do what?”

New study: Vitamin D levels of the Maasai and Hadzabe of Africa

Now, this same group studied more things in equatorial Tanzania, adding three tribes of fishing Bantus to their previous two tribes, the pastoral Maasai and the hunter-gatherer Hadzabe. They studied how vitamin D levels change with age, how warm water surface lake fish consumption affects vitamin D, including 25(OH)D₂ and 25(OH)D₃ levels, and finally  how levels change before, during, and after pregnancy in naturally living populations. We will be covering their paper in a three-part blog series.

To begin with, they found vitamin D levels increase, not decrease, with age! The 50 year-olds had higher levels than the 20 year olds. One of the highest levels was a 65 year old whose level was around 70 ng/ml. The highest level overall was in a pregnant woman (105 ng/ml), 5 points higher than the usual upper limit, a limit most practicing physicians think is toxic. To my knowledge, this is one of the highest “natural” levels ever measured. While it is interesting that levels reached this high, naturally, I would caution that this doesn’t mean this is what levels should be, but it does open up a can of worms for ranges of “normal” as measured by the conservative LCMS method, which is the method Luxwolda and colleagues used

In the USA, vitamin D levels fall rather precipitously with age, especially after retirement, although I have always wondered if the reason was not an impaired capacity to make it in the skin, but rather lack of sunlight causing the skin to lose its ability to make it (if you don’t use it you lose it). To my knowledge, this is the first study showing such a relationship with age. While not a strong association, it was significant. More importantly, they found no evidence vitamin D levels fell with age in populations of humans who get their vitamin D mainly from daily equatorial sunlight.

People who read this page, went on to read these pages:

Dr. John Cannell is founder of the Vitamin D Council. He has written many peer-reviewed papers on vitamin D and speaks frequently across the United States on the subject. Dr. Cannell holds an M.D. and has served the medical field as a general practitioner, emergency physician, and psychiatrist.
View all posts by John Cannell, MD →
elderly hunter gatherers sun exposure vitamin d levels