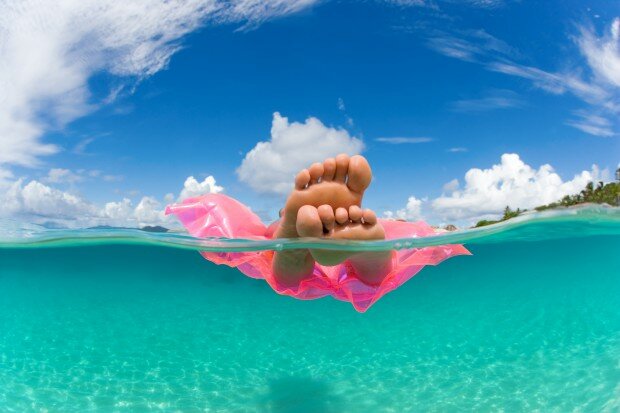 Two recent papers blame increased ultraviolet (UV) exposure for the growing rates of melanoma in the UK18, 19. Not considered were other possible explanations for the rising rates of melanoma, including the use of sunscreen, especially at latitudes above 40º 7, and a combination of underdiagnosis in the past with over diagnosis more recently14. [Melanoma mortality rates changed little in the U.S. between 1986 and 2001 while incidence rates more than doubled14]. As noted in Parkin, Mesher and Sasieni (2011), chronic UV exposure may reduce rather than increase melanoma risk2. Both chronic UV irradiance and smoking are thought to reduce the risk of melanoma through increasing elastosis (aging) of the skin8. Sunscreen can increase risk of melanoma at high latitudes because it does not block non-erythemal solar radiation well, and reduces the formation of skin elastosis. A recent paper reported that melanoma tumours recruit fibroblasts in order to grow4. Thus, it seems likely that elastosis impedes the recruitment of fibroblasts, explaining the inverse correlation with smoking and little change with chronic UV irradiance. Smoking rates in the UK have declined since before 1975, with declines in lung cancer mortality rates for males, from 110 deaths/100,000/year in 1970-75 to 55 deaths/100,000/year in 20061. Lung cancer mortality rates for females rose to 30 deaths/100,000/year in 1985 and remained at that level through 20061.

There is also reasonable evidence that moderate solar UVB exposure and increases in vitamin D intake reduce the risk of melanoma3.

Unfortunately, recent opinions on the role of UV irradiance as a cause of melanomas and public awareness campaigns15 have apparently led to reduced serum 25-hydroxyvitamin D [25(OH)D] concentrations in the UK6. Solar UVB exposure is a very important source of vitamin D in the UK16, and there is a large body of literature linking higher solar UVB exposure to lower rates of about 20 types of cancer12. Observational studies also report that prediagnostic serum 25(OH)D concentrations are inversely correlated with breast and colorectal cancer risks9. One problem with prospective observational studies is that single values of serum 25(OH)D from the time of enrollment are used whilst serum 25(OH)D concentrations change with time; thus, prospective studies may underestimate the effect of vitamin D in reducing the risk of cancer10 since vitamin D status changes from baseline values as time increases.

The effect of solar UVB in reducing the risk of cancer in the UK can be estimated from seasonal variations in serum 25(OH)D concentrations and the relationships between serum 25(OH)D concentrations and incidence rates for breast and colorectal cancer9. Mean serum 25(OH)D concentrations for those aged 45 years living in the UK range from 35 nmol/l in February to 75 nmol/l in September16.  Incidence rates for breast and colorectal cancer are 35% and 30% lower, respectively, for the September concentration compared to those for the February concentration. Thus, the actual annual reduction in incidence rates for these two types of cancer with adequate vitamin D repletion could be about half of these estimates. Since there are many other types of cancer that are vitamin D sensitive with similar geographic variations in the United States with respect to summertime solar UVB doses12, the overall reduction in cancer rates that could be achieved with vitamin D repletion could be much higher than for just these two types of cancer. In 2007, there were 988 male and 837 female deaths from melanoma in the UK, and a total 71,336 male and 65,458 female cancer deaths20. Thus, melanoma accounted for 1.4% of male cancer deaths and 1.3% of female cancer deaths. Assuming a 15% reduction in all-cancer incidence and mortality rates with adequate solar UVB exposure would imply 20,500 reduced cancer deaths in 2007, which is 11 times the number of melanoma deaths.

More recently, the higher rates of poor health in the northern portions of the UK, compared to the rates in the southern portions, have been linked to lower solar UVB doses and lower vitamin D status5, 13.

Thus, it is highly likely that if mean serum 25(OH)D concentrations were to be increased in the UK to 100 nmol/l, through a combination of moderate solar UVB exposure, fortification of food with vitamin D, and greater access to vitamin D supplements, cancer incidence and mortality rates would fall dramatically, perhaps by 10-20%, and incidence and mortality rates for many other types of disease might also prove to fall as well11.

After this manuscript was prepared (January 2012), the “Leading medical research charity Arthritis Research UK has reminded those groups with a potential deficiency – such as people aged over 65, pregnant and breastfeeding women, children aged six months to five years old, and those who rarely go outside – that sunshine will increase their levels of vitamin D.”1

Dr. William Grant is an epidemiologist and founder of the nonprofit organization Sunlight, Nutrition and Health Research Center (SUNARC). He has written over 140 peer-reviewed articles and editorials on vitamin D and health. Dr. Grant is the Science Director of the Vitamin D Council and also serves on their Board. He holds a Ph.D. in Physics from UC Berkeley.
View all posts by Dr William Grant →
melanoma UV exposure

3 Responses to Does UV exposure decrease risk of melanoma?