Association to mechanism to causality: vitamin D’s effect on inflammation of the gums 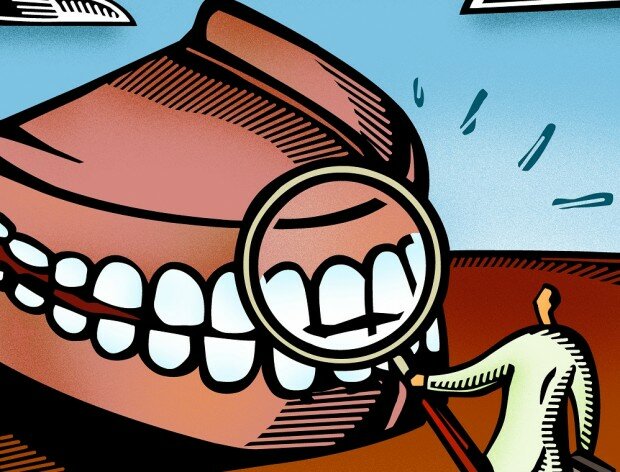 A typical path in science may look a little something like this:

Sometimes the mechanism is discovered last, but not in the studies we’re looking at today. And in this set of studies, both the mechanism study and causality study cite the initial study that observed the association.

For those of you whose eyes have glazed over from how abstract I’m being, let’s get specific with the link between vitamin D and gingivitis. We’re talking about vitamin D levels as the characteristic and inflammation as the health condition. In these studies, the specific kind of inflammation we’re looking at is gingivitis – inflamed gums.

This study analyzed data collected between 1988 and 1994 by NHANES III, a large survey done by the federal government on the health of a representative sample of the U.S. population. Among hundreds of other things, this survey included both a vitamin D test and a dental exam that reported gum bleeding on probing for each tooth in each individual. Bleeding on probing is a specific method used by dentists to identify gingivitis – gum inflammation. The study sample was 77,503 probes in 6,700 individuals.

Next came the 2012 study examining the mechanism by which vitamin D levels impact inflammation of the gums:

What this study shows is that this specific gene is also strongly up-regulated inside a certain type of cell in the gums by IL-1 beta, a protein that mediates inflammatory response, and by sodium butyrate, a metabolite of a type of bacteria associated with gum inflammation. After the CYP27B1 gene is up-regulated inside a cell, more of the cell’s 25(OH)D is converted into activated vitamin D, which in turn signals the DNA machinery of that cell and nearby cells to produce other proteins that reduce inflammation.

Interesting, but does it really work? To demonstrate that effectively, we need a randomized control trial, and this year we got one:

This study was done by researchers at the Maratha Mandal Dental College in Belgaum, India. The study used the Löe and Silness gingival index to measure inflammation, which resulted in a score of 0 to 3 for each subject in the study. This measurement was taken four times: at the beginning of the study, after 30 days, after 60 days, and after 90 days. Serum 25(OH)D was measured in each subject at the beginning of the study and again at the end of the study 90 days later.

The study’s 96 subjects were split into four groups randomly assigned to different levels of vitamin D supplementation. Personnel involved in measuring gingival scores were blind to which group the subjects were in. The supplements were in coded kits of 30 tablets. Neither the subjects nor the investigators knew how much vitamin D each group was getting until the codes were broken at the end of the study:  0 (placebo), 500, 1000, or 2000 IUs. 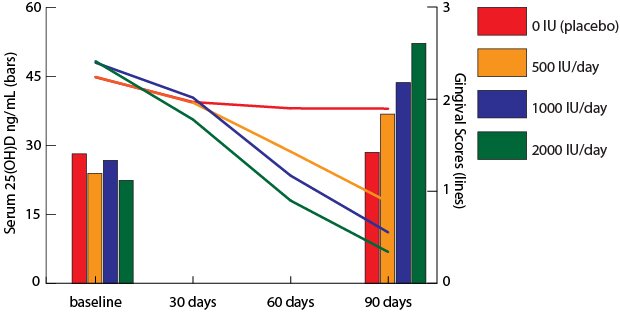 I should note that subjects were excluded from this study if their serum 25(OH)D was less than 20 ng/mL or more than 65. They had to have a gingivitis score of at least 1, but were excluded if their teeth or gums were in bad shape (periodontal pockets > 3 mm). They were in good general health, aged 18 to 64, including both men and premenopausal, not pregnant women. The study excluded individuals who were currently smokers or who had been so in the last five years, as well as individuals taking medications to control inflammation.

There are several interesting things we can say as a result of this set of studies:

After a career writing about computers and personal finance, Tom Weishaar is a doctoral student in the health education program at Teachers College, Columbia University.
View all posts by Tom Weishaar →
gingivitis

4 Responses to Association to mechanism to causality: vitamin D’s effect on inflammation of the gums