...and receive an autographed and dedicated copy of Dr. Cannell's new book.

Vitamin K is best known for its beneficial effects on blood clotting and bone.

Vitamin K is a fat-soluble vitamin best known for its regulation of proper blood clotting and its significant role in bone health. 1

The term "vitamin K" actually refers to a family of related substances called naphthoquinones, in which there are two sub-types, known as vitamin K1 and vitamin K2.

Vitamin K2
Alternate names: Menaquinone and menatetrenone.
"Vitamin K2" is a term that also encompasses different sub-types, of which MK-4 and MK-7 are the two most commonly found in supplements.

MK-7 (also MK-8 and MK-9)
Produced in the human gastro-intestinal tract (though not absorbed).
Sources are bacterially-fermented foods such as natto and cheese. 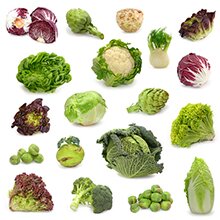 Green, leafy and cruciferous veggies are a food source for vitamin K1.

Research is uncovering a role for vitamin K in such a wide array of physiological processes that interest in the vitamin is rapidly growing among the scientific community. 2 3

Preliminary evidence indicates a protective role for vitamin K in the following:

Vitamin K also shows promise as a potent antibacterial agent 24 and may have a role in regulating energy metabolism and inflammation. 25 26

Vitamin K-dependent proteins in the body act as potent inhibitors of vascular calcification. So adequate vitamin K will help to ensure calcium ends up in bone where it belongs, instead of calcifying various soft tissues. 27 28 29 30 31

Bone health benefits from both vitamin D and K as they work together, aiding in proper bone formation and maintaining bone density. 5 32 33 34 Both BMD and bone mineral content (BMC) have exhibited significant and sustained increase. 35 36

Cheese is a great source for vitamin K2 MK-7, with Swiss Cheese having the highest amount.

Unlike other fat-soluble nutrients, vitamin K is not stored in the body and must be received daily through diet or supplementation. In fact, research indicates one can become deficient in vitamin K in as little as 7 days. 37

In 2000 the National Academy of Sciences established the following Adequate Intake (AI) levels for vitamin K:

Due to increasing awareness of vitamin K's beneficial health effects, many scientists are now suggesting the recommended intake be increased. 30 39 40

Which vitamin K should I use?

While research indicates both vitamin K1 and K2 have beneficial actions in the body, it is vitamin K2 that is indicated as a necessary co-factor for vitamin D. However, the jury is still out as to the various actions by MK-4 and MK-7 in the body, and which one, if either, is more essential to health.

Vitamin K1 insufficiency in bone has been shown to increase risk of vertebral fracture independently from BMD. 43

No adverse effects have been reported for vitamin K - whether from food or supplements - and so there are no documented toxicity symptoms. There currently is no Upper Limit established for vitamin K.

It is generally recommended to avoid vitamin K altogether when using blood-thinning drugs such as Warfarin or Coumadin. However, studies have found vitamin K2 to be an effective stabilizer in anticoagulant therapy, proving beneficial in situations of over-anticoagulation or when the response to therapy has been variable. 45 46 47 48 49